It’s not everyday you get to say “I’ve sold out at the Corn Exchange!”  well last week I did. Ok yes, the audience was thirty people and ok yes the tickets were free, but still, it happened and it was pretty darn special.

The dedicated adventurers who took time out from their busy days to go and phone a number in a payphone were rewarded with a merry jaunt around some of Brighton’s best record shops and finally with a One Pound Note which instructed them to meet at the George IV statue. Gotta say, it makes me feel kinda smug having my Irish head on the English pound note… 😉

Yes, George IV. If ever there was a monarch who was truly Brightonian, it was George. His legacy, the bizarre and beautiful Royal Pavilion and gardens, is the city’s emblem and so performing in this most Brighton of venues was pretty wonderful. Not everyone knows that the Dome and Corn Exchange was at one point George’s stables and riding school. * But what really got me, was the fact that George like to party so much that the English parliament had to bail him out with hundreds of thousands of pounds, and they did this more than once, so he could carry on partying. Good old George clearly knew how to make some money – and how to spend it.

And so, the track that inspired the venue was “This one’s gonna make me some money”. In the treasure hunt clues, I did try to hint at the venue – getting people to literally exchange a  piece of corn  in return for their ticket but still it was surprising how few people guessed! 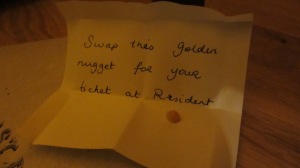 The gig itself was a total highlight for me, Brighton Noise have written up a very lovely review and a description of the night if you didn’t make it, read it here.

For those of you signed up to the mailing list you will have received the fourth and final //TreasureTrack//, for everyone else you can listen to “This one’s gonna make me some money” here on SoundCloud.

*The artwork for the final //TreasureTrack// is very much inspired by the sea and George’s eclectic, expensive horses. Some of you eagled-eyed readers and listeners have noticed that the //TreasureTrack// artwork does indeed join together like a four-piece jigsaw (cleverclogs!). So if you haven’t done so already than go on – put all four tracks together for a very wonderful original print by Naomi Garriock.

Well that was pretty special!
Fourth and final //TreasureTracks// last night with more than a little help from Brighton Dome’s Source New Music. A small unknowing crowd who had been instructed to turn up at George IV statue were led to the Dome stagedoor, then through the 17th century underground tunnels, past dressing rooms, quick stop off at the Dome bar and onwards to the Corn Exchange Foyer, where I was sat waiting on stage, (yes a stage!). Such a memorable night, beautiful space and again such a wonderful adventurous listening smiling laughing audience.. 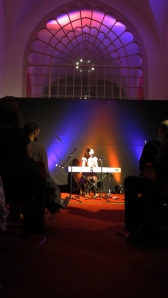 The Corn Exchange was originally a riding school for King George IV and the Brighton Dome was his stables. A seriously impressive building steeped in history and such a Brighton landmark it was an absolute honour to have had the opportunity to play there.

Right, well there have been a nice pile of you who have collected tickets! I have really enjoyed listening to the voicemails on the phone. Apologies for the slight wee pong in the phonebox… it wasn’t me!!

No, seriously, you guys are definitely deserving of your live music treasure.  And I do promise this one will be pretty darn great.

If you know of anyone else who is looking for a ticket do let me know. The space has a very tight capacity but I can squeeze a few more people in. So from Wednesday 14th November the best way to get a ticket is to email me direct at hiddentreasuretracks@gmail.com

Looking forward to seeing you there!

Hello Music adventurer! this photo is for you. Follow the directions of the clue below and you will be taken on a 10-15 minute trail through North Laines in Brighton at the end of which you will have found your ticket for a pretty special secret gig in a wonderfully secret (and central) location in Brighton.

So for you adventuring types, your hard-won treasure will be an intimate music performance with me, Catherine Ireton at 8.15 on Saturday 17th November. (toptip – best time to do the hunt is from 12.00 to 18.00.)

Hope you can come! 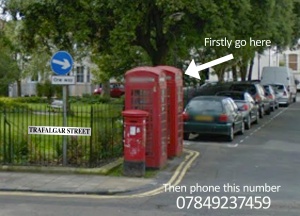 //TreasureTracks// no. 4 This one’s gonna make me some money*

I know I’ve been a bit quiet lately but its because I’ve been hard at work behind the scenes preparing for the ultimate finale to this experimental musical journey.

Hope you can make it as this one is extra special, extra secret.